With a traditional design intended to summon up feelings of nostalgia, the Spinning Wild online slot may not look like much; but pause a while and look  a little closer and we're sure you'll be pleasantly surprised. This slot packs in the bonus features with a standard scatter and wild symbol, plus a free spins bonus round and unique Spinning Wilds feature. It's safe to say that the Spinning Wilds slot online has a little to offer all its players.

There's no real stand out theme on offer with the Spinning Wilds slot game, instead, GVG have focussed on giving players a good-looking slot machine that incorporates many iconic slot elements such as its symbols which include classic slot symbols like Bells, Cherries, and BAR's.

The highest-paying symbol used in the Spinning WIlds slot game is the wild symbol, which can award up to 500x a player's wager. As a wild symbol this icon can also stand in for all other symbols apart from the scatter. The diamond is the second most valuable symbol and can payout a maximum of 400x stake. The lucky number 7 is up next and can give you a payout of up to 300x stake. The golden bell is worth 200x your stake, while the cherries are worth 160x your wager. The iconic BAR symbol is worth an impressive 100x your stake amount. Lastly, there's the low-paying playing card symbols A-10 which can pay up to 40-80x your stake. 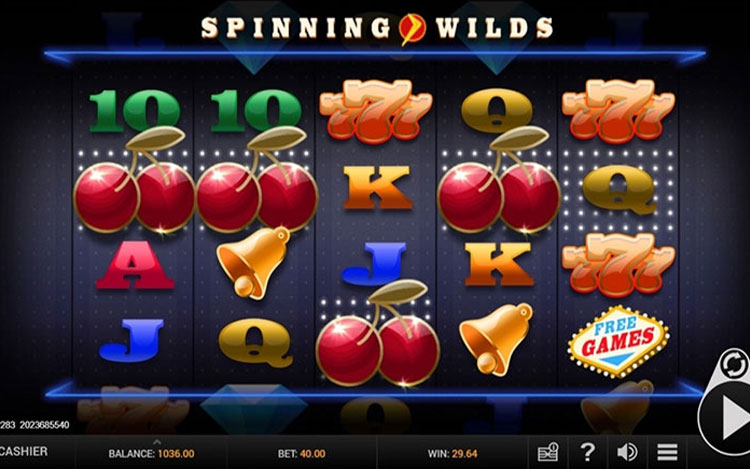 The Basics: How to Play Spinning Wilds Online Slot

The Spinning Wilds slot is incredibly beginner friendly and should appeal to both new and seasoned players. Firstly, you'll need to set your wager, which is done by clicking on the button with three white lines found on the top right hand side of the game screen. Here you'll be able to tinker with the coin denomination and the coin value until you find a total bet that you're happy with.

Once you're satisfied with your wager simply click on the 'play' button to set the reels in motion. Like many other slot machines, winning combinations are formed when players land three or more matching symbols across an active payline, starting from the left-most reel.

There's also a Spinning Wilds mobile slot that on the go players can enjoy from any device with no worry about compatibility issues.

While it's fun imagery and easy to configure interface may speak of a lower volatility slot game, the Spinning Wilds slot machine is actually played at high volatility. Information has not yet been provided regarding the theoretical return to player (RTP), but it's likely that the Spinning Wilds game has an RTP in the usual ballpark of 95-96.5%.

The 40 paylines used in the Spinning Wilds slot are fixed so you don't need to worry about activating or deactivating paylines when setting your bet; instead whatever you wager will be equally divided across the lines. The lowest wager for the Spinning Wilds slot is as little as 10p per spin, all the way up to $400 per spin, meaning that all budgets are catered for here. 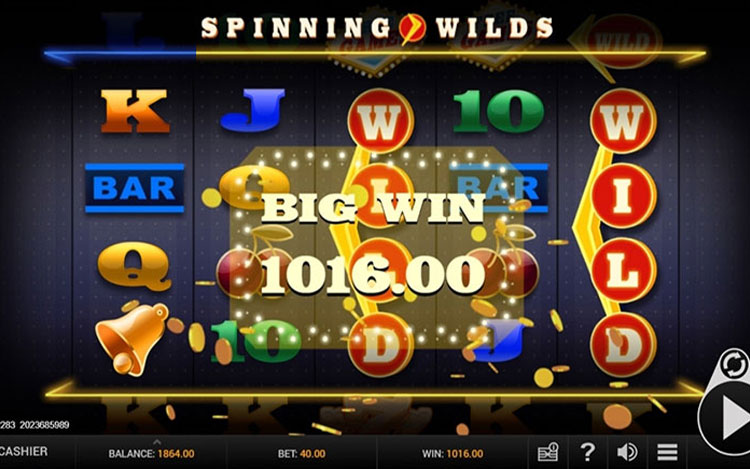 The Spinning Wilds slot has three key bonus features which starts off with the free spins bonus round. This feature is triggered by landing three or more scatter symbols within a single spin and will award players with 5 free spins. Any scatters that are landed during the free spins round will add any extra spin to the tally.

Next is the Wild Sign symbol, which as the games wild is able to stand in for all other symbols, but also has a payout value of its own of up to 500 x stake, which is a nice touch.

Green Valley Games (GVG) is part of larger developer SkillonNet's team and are unique and creative indie developers who are always looking for the next new and original twist on the classic slot formula. Spinning Wilds is just one of 1200 games that SkillonNet has a part in creating, but is definitely one of the more stand out titles.

So there you have it, our honest online slots review of Spinning Wilds. While this slot may not have the immersive theme that some players are looking for, or indeed a volatility too high for some players, there's definitely a mass market appeal to this slot. The high volatility keeps spins exciting, and the classic symbols add a dash of nostalgia that older slot players will appreciate. The Spinning Wilds feature is certainly a strike of genius and feels like an upgraded version of a mystery symbol feature.

If you like the sound of what the Spinning Wilds slot has to offer then make sure you sign up and play today at Slingo!