Welcome to Slingo Spotlight, the fun blog series where we take an in-depth look at some of our favourite Slingo games! We’ll cover their themes, bonus features, how to play and more to give you everything you need to know about the best Slingo games.

This time the spotlight is on Slingo Extreme, the red-hot Slingo game with a top prize of up to 500x your bet.

Take a chance on this fast-paced Slingo game, which features Jokers and Super Jokers to help spice things up a little!

With its fiery design and simple yet fun 5x5 grid format, Slingo Extreme is perfect for both experienced players and Slingo newbies.

Read on to find out more about this sizzlin’ Slingo game!

Slingo Extreme has a fiery red design that fits the theme of the game perfectly. When you match a number on the grid it’s marked off by a bright green star, making it easy to follow your progress in the game.

The grid itself is clear and easy to understand, with a pay ladder on the left of the game screen that you can work your way up by completing Slingos.

Slingo fans will recognise some familiar characters and symbols like the Joker and the Devil (boo!), who can appear at random on the reels throughout the game.

We love the classic look of this game, which just goes to show that great games like Slingo don’t need lots of bells and whistles to create a fun gaming experience!

For those of you who are interested in the more technical aspects of the game, Slingo Extreme has an RTP (return to player) of 95%. This RTP makes the Slingo game medium volatility.

And with a minimum bet of £0.50 and a maximum bet of £100, the game appeals to players with a wide variety of budgets.

The top prize on this 5x5 grid game is 500x your initial bet – fingers crossed for a Full House!

How to Play Slingo Extreme 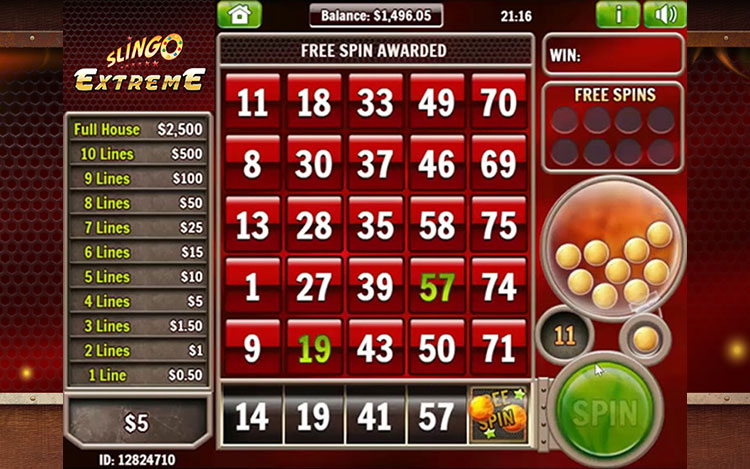 Before playing Slingo Extreme online you’ll need to decide your stake by using the + and - buttons on the left of the screen. Once that’s sorted, you’re ready to play!

Hit the START GAME button to begin. The aim of the game is to match numbers on the reels at the bottom of the screen with those on the grid, and each game lasts for 11 spins.

You’ll win a Slingo for marking off five numbers on one of 12 win lines. With each Slingo you win, the cash prize increases – your progress is shown in the ladder to the left of the screen. Win a Full House (11 Slingos) to be rewarded with 500x your original stake!

The Joker in Slingo Extreme lets you mark off any number in the column above to help you complete Slingos. There’s also a Super Joker, which enables you to mark off any number on the entire grid, and even a Joker Bonus cash prize that is activated by landing three or more Joker/Super Joker symbols on the reel.

Gold coins award an instant cash prize, and watch out for the Devil symbol – he’ll act as a blocker to try to stop you landing winning combos!

Find a Free Spin symbol on the reels to be awarded an extra spin at the end of the current game. 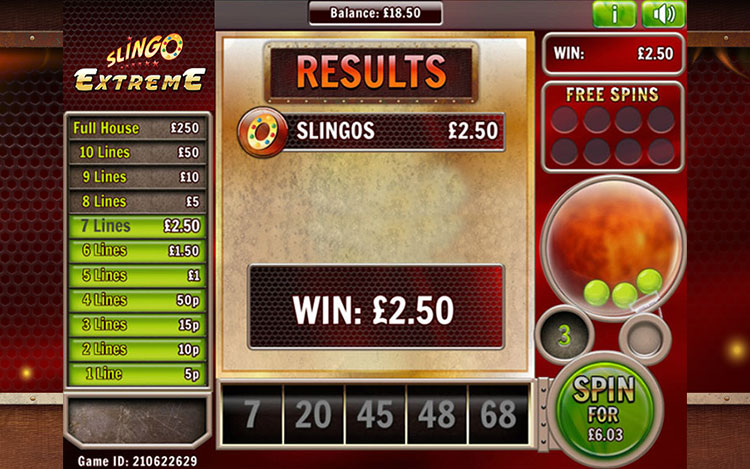 Although Slingo Extreme is a pared-back version of the game, it still offers a few fun bonus features for players to enjoy. Here’s a quick run-down:

Joker and Super Joker: Find three or more Jokers or Super Jokers on a single spin to win a cash prize! The value of the prize is shown as part of the pay table on the left of the game screen, and is dependent on your total stake.

Gold Coins: Find a gold coin on the reels to win an instant cash prize! The value of the coins is shown on the left of the game screen too and is also dependent on your total stake.

Free Spins: Find the Free Spin symbol on the reel to win an additional spin at the end of the current game.

Extra Spins: After each game, you’ll get the opportunity to purchase extra spins and continue the fun! The price for each spin will be shown on the green ‘spin’ button.

Like all Slingo games, Slingo Extreme is fully optimised for desktop and mobile use so that you can play whenever and wherever suits you best. With Slingo’s high-quality gaming platform and user-friendly interface, playing our games on your mobile is a breeze.

With its red-hot design and exciting Joker feature, Slingo Extreme really does bring the heat! And where better to play it than the official home of Slingo? Join us now for an exciting gaming experience that puts you first.